tl;dr: we got another dog! 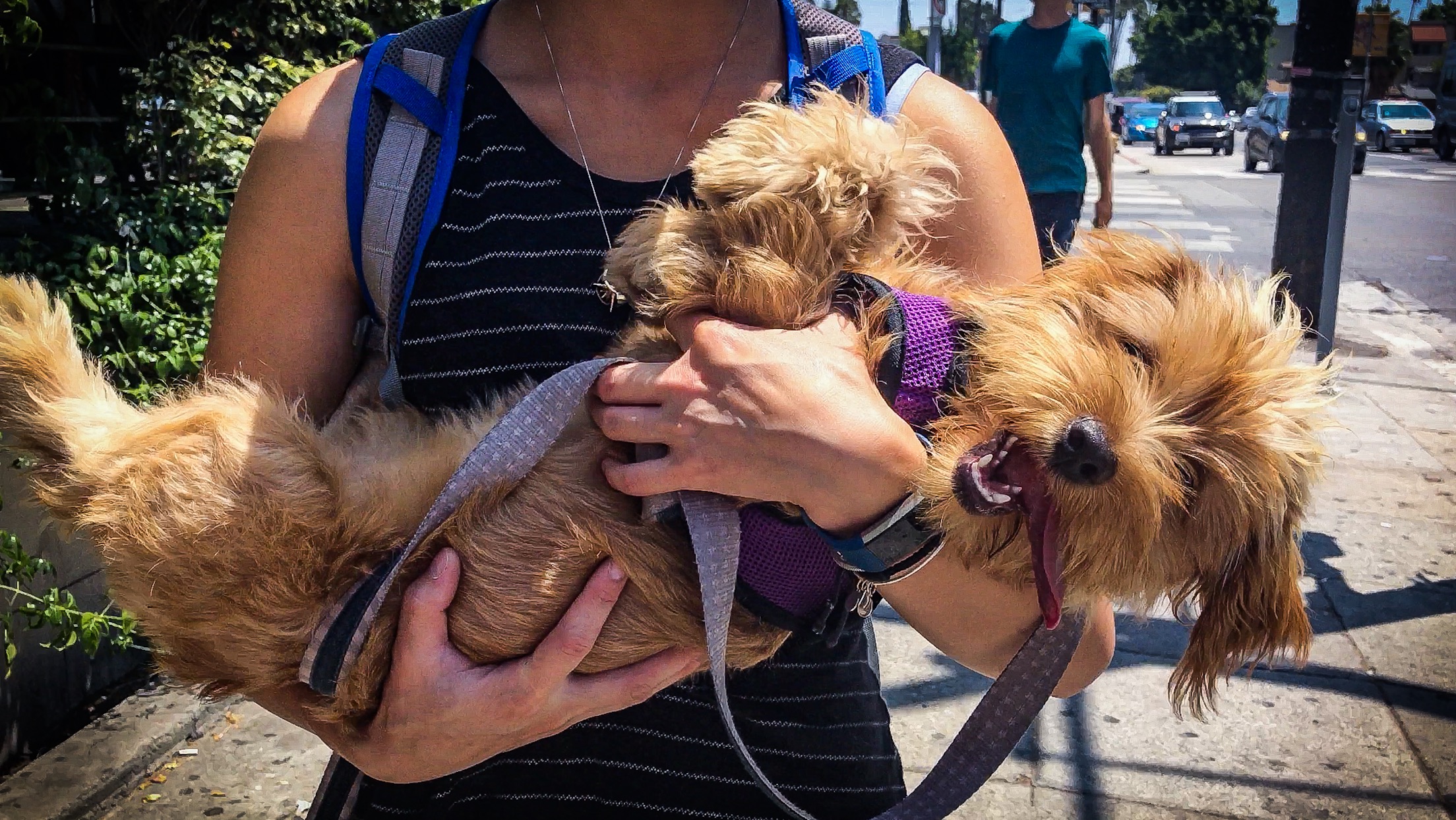 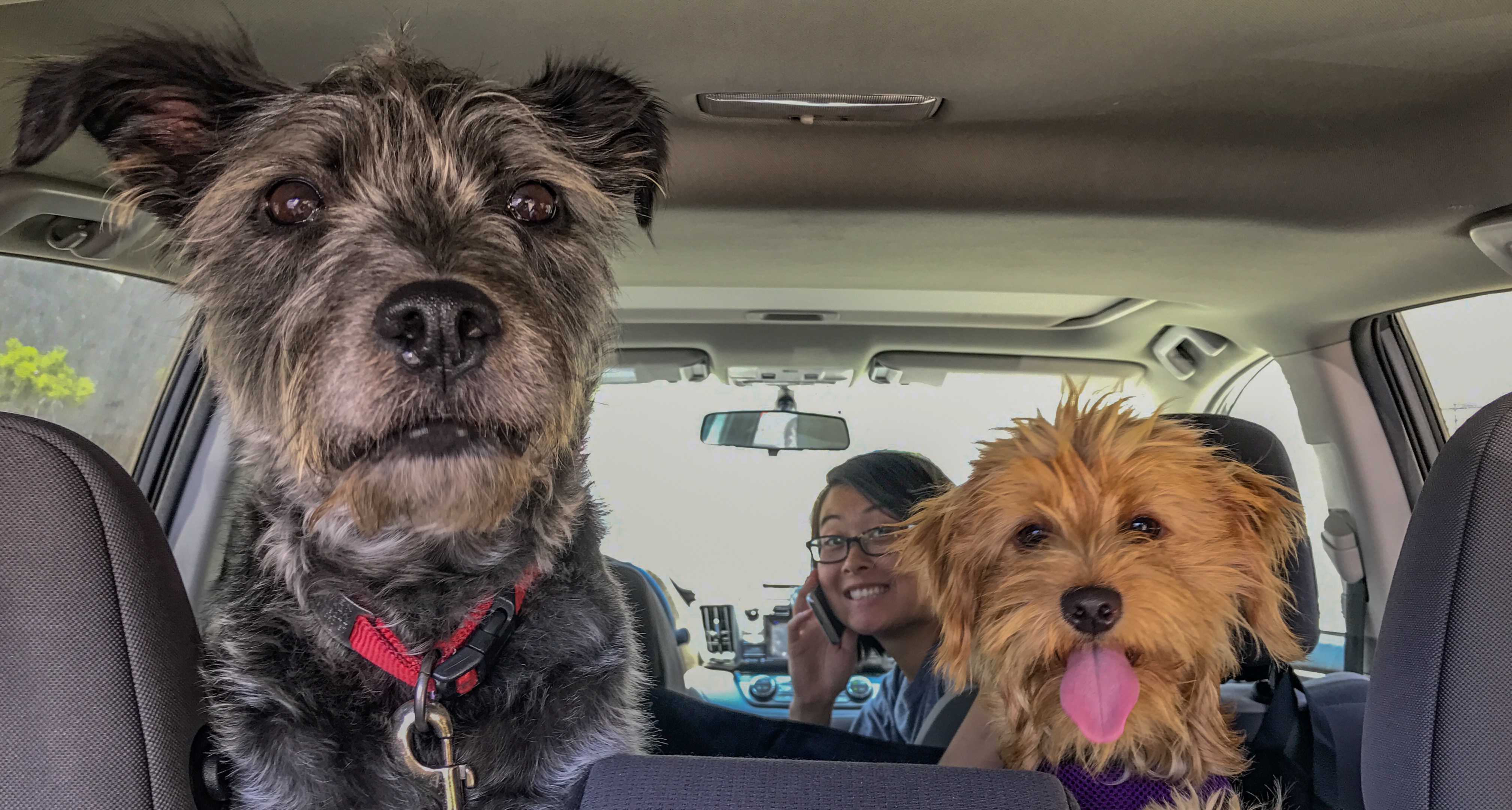 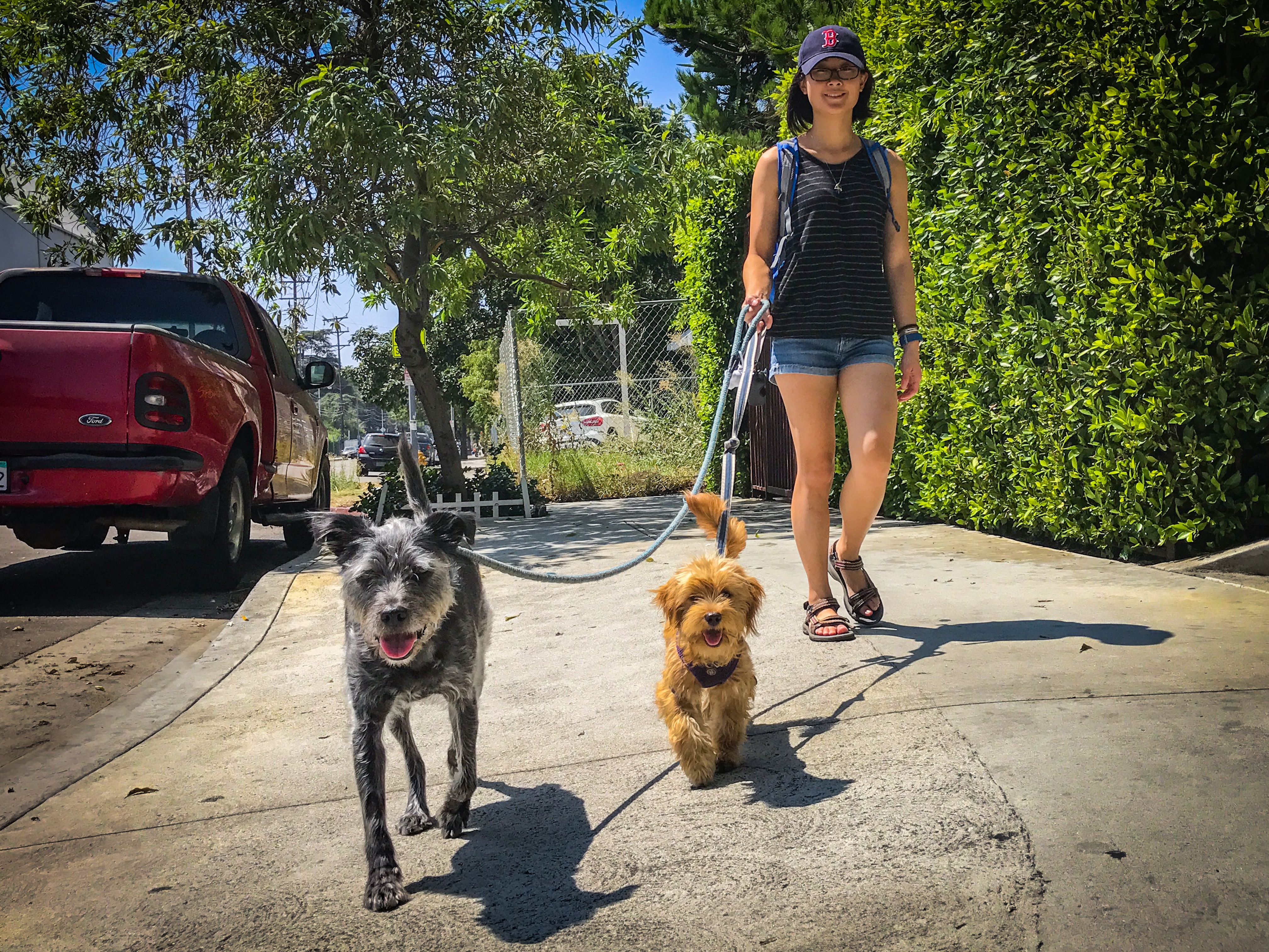 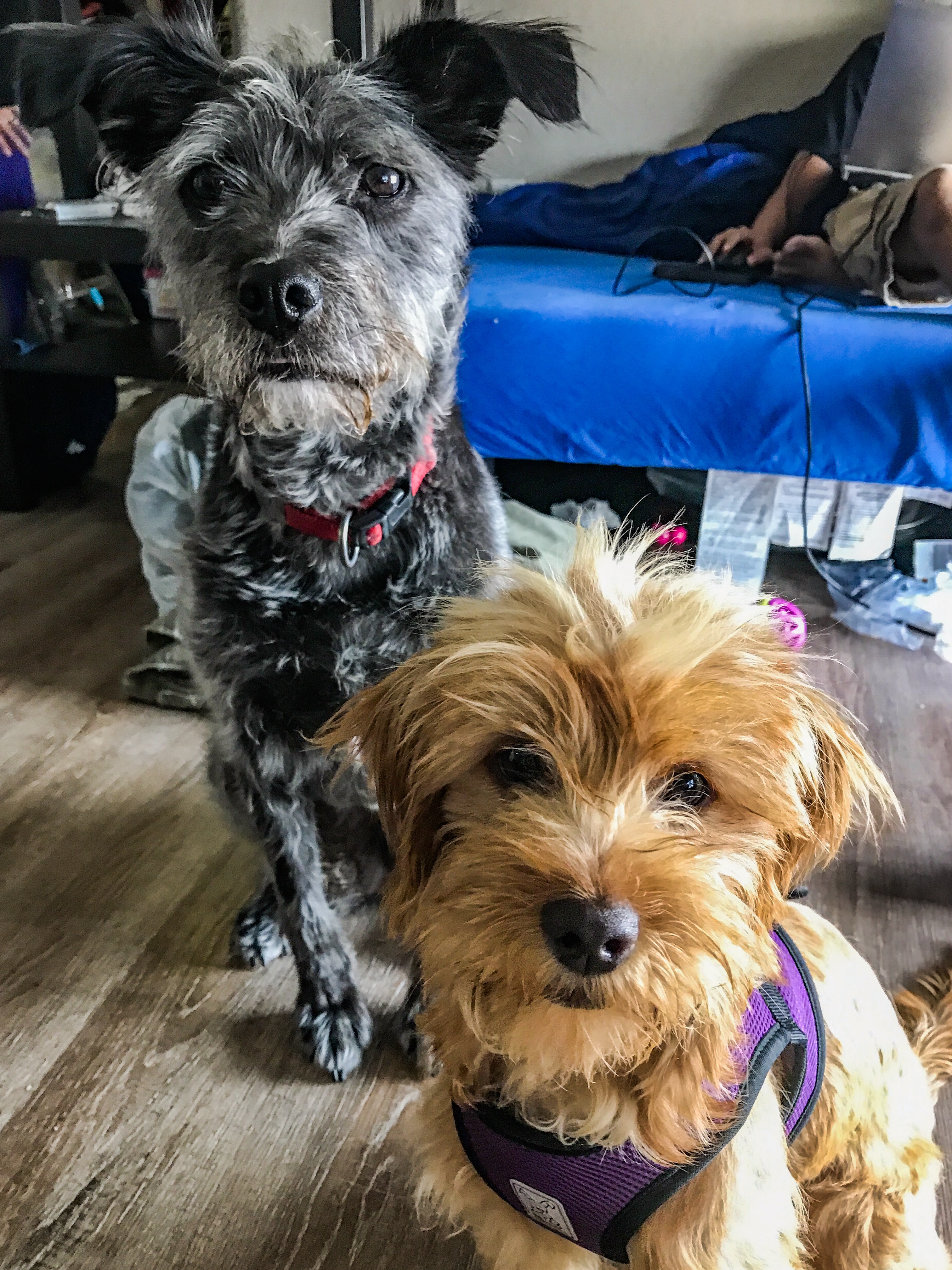 A little under two weeks ago, I enjoyed Taco Tuesday with Tiff and Cody, one of my brothers who has been visiting from back home.

Although it was a short 1.1 mile walk away, we were so hungry and lazy that we took a Lyft there. The return home was on foot; we didn’t wanna be that ridiculously boujee.

On the way back along Sunset Blvd there was a traveler who had two dogs. Duke was with us, and of course we had them spend some time together. I noticed that he was a Dirty Kid (urban dictionary and an article here to be informed) and really love hearing about their travels, so I struck a conversation. Part of that convo involved an offer to take one of his pups. They were litter mates and only five months old. 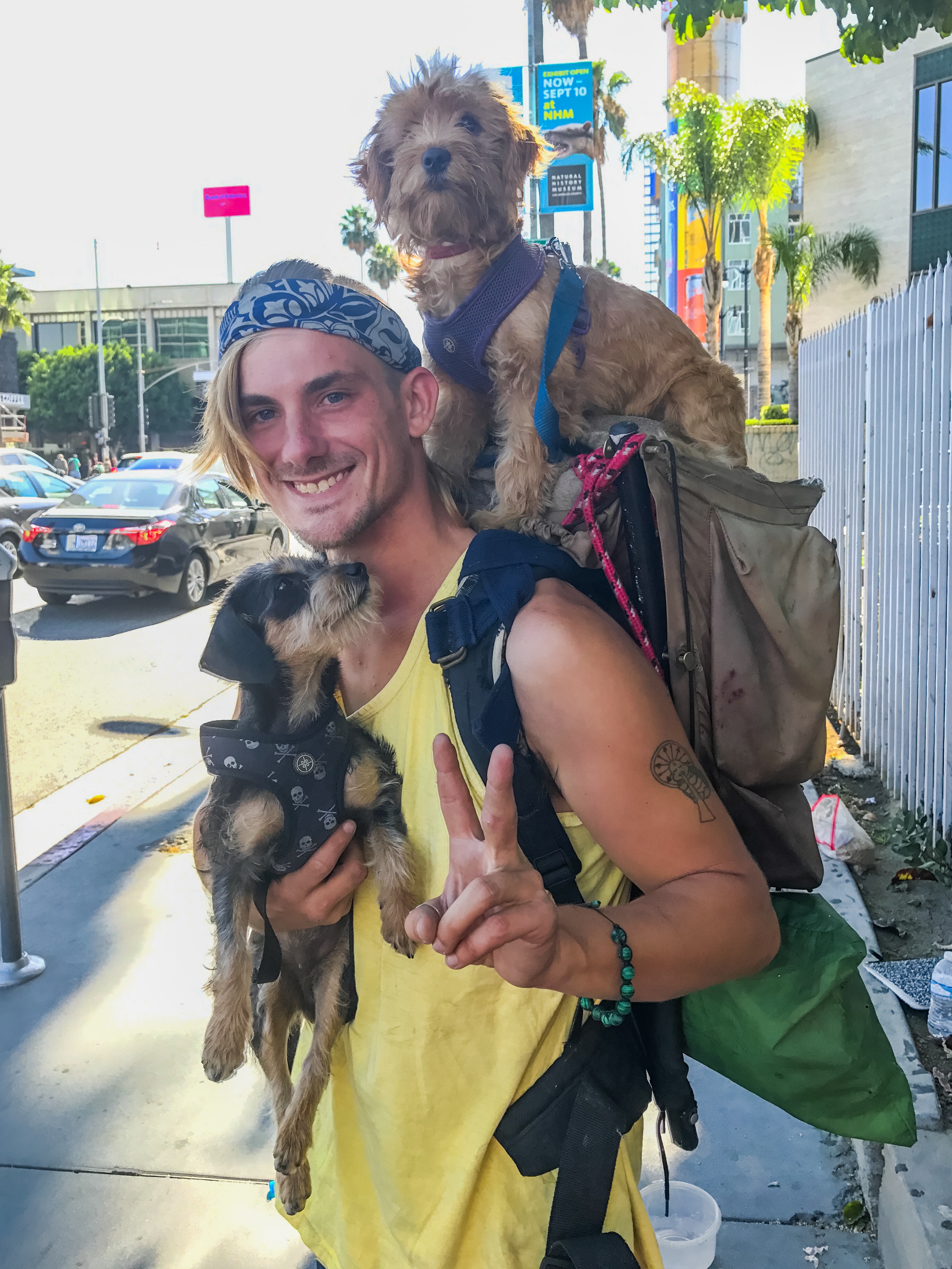 The impulsive part of me that usually shows itself more often than not wanted to say yes, but I knew that it was too crazy of an idea to decide on without Tiff being ready. Side note, we were looking at adopting an older pup back in April and missed our ideal chance by just a few hours.

“It’d be really helpful if you could just take her now. Cinnamon is too friendly and her sister Marge is more practical for me to have. She is alert and is very cautious and active as a guard dog. It’s also easier to get into public places because it’s more believable to have one dog as a service dog.” That was Tommy’s proposition to me and Tiff.

We declined and said that we’d think it over, you know, the generic, “I gotta check on things first.” Either way, we gave him our numbers and parted ways.

The whole ten minute walk home was full of silence as Tiff and myself were separately wondering how it could work. Tiff put it on chance, that if he actually called back, we would at least take care of her before deciding on what to do. This was an animal in need and we had to do something. I proceeded to call animal hospitals “just in case” to setup initial appointments for vaccinations and such. Within ten minutes of being home, we went back.

We made our way back to the area where we met Tommy to no avail. A security guard, Travis, who works in the fancy pants building nearby who was talking to Tommy, told us which way he went and where we could probably find him. At this point it’s been twenty five or so minutes and we needed to cover a lot of ground. Tommy was looking for a place to pitch his tent for the night.

We split on one of the busiest parts of Hollywood Blvd after walking up a street well known to have homeless people and pan handlers. Altogether, we covered about 9-10 miles to no avail.

Travis noted that he was eager to do something about it. Not really to adopt the dog, but to at least put her in a better situation until it could be worked out. He also told me that Tommy stopped by a few times a week. I left my number with him.

Our night was filled with yearning for her. As you can see, our initial position of, “maybeeee, let’s see what happens and just let it work itself out” went from us going out of the way to tip the scale towards, “WE NEED HER WE WANT HER WE GOTTA HAVE HER”.

In the evening just one day after, I received a call from Travis and we met up with Tommy to make a life changing decision that affected so many people’s and animals’ lives.

Her First Night With Us 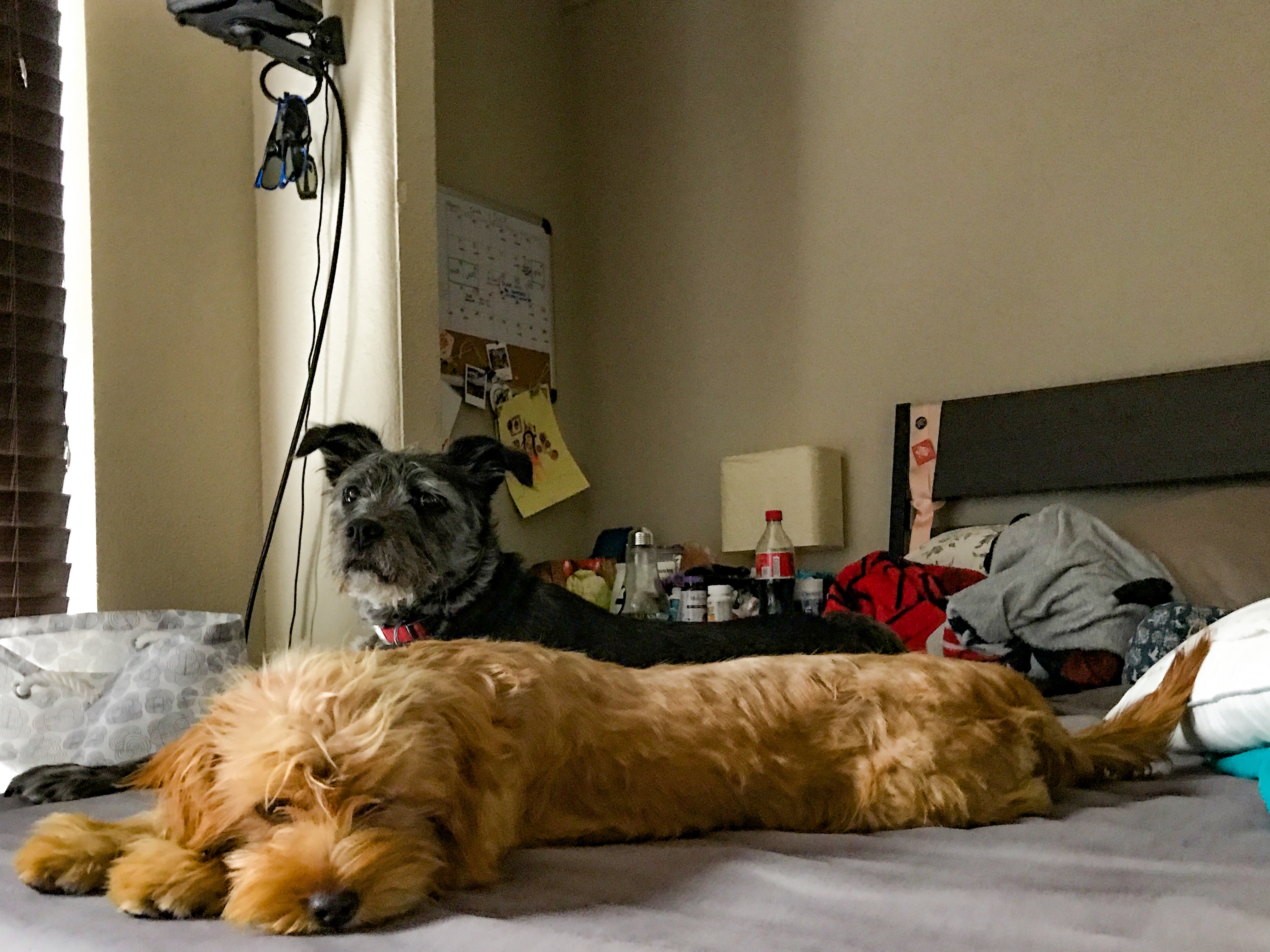 Myself, Tiff, Tommy, and Travis chatted for a bit before making a tearful farewell. Cinnamon wouldn’t walk with us back home. She instead wanted to run around and walk back towards her sister and dad. When we got home, she would stay towards the window and look out for them. You could tell by her whines and cries.

It was interesting to see how wild of a pup she was. She plays and tries to chew literally everything (maybe it’s a pup thing), whereas Duke is more than well aware of the objects in the house that he is allows and not allowed to have. He also never tries to go for treats that may be easy pickings. Our new dog’s personality included mischief, we could tell as she pulled treat bags off to the ground and tore into them.

Cinnamon, as you can probably tell that we renamed her Daisy, preferred the hardwood floor to a seldom used, very soft bed. A preference gained from a lifetime of sleeping outside.

In the evening, Daisy preferred to sleep near the door and cried all night for her Dad and sister. Duke was also having a tough time with the transition. We bought a crate from Amazon which was delivered within the hour (thank you thank you Prime Now) and moved her and her little room to the door, bathroom, window, everywhere. All just to make her feel more comfortable. It just made her cry harder. He whined just as loudly as she did, frustrated with the fact that he couldn’t sleep. I wish I had recorded this moment.

She would refuse to walk unless it was up the street, towards where her dad was, and kept looking back in that general direction. I’ve never been in this situation before. 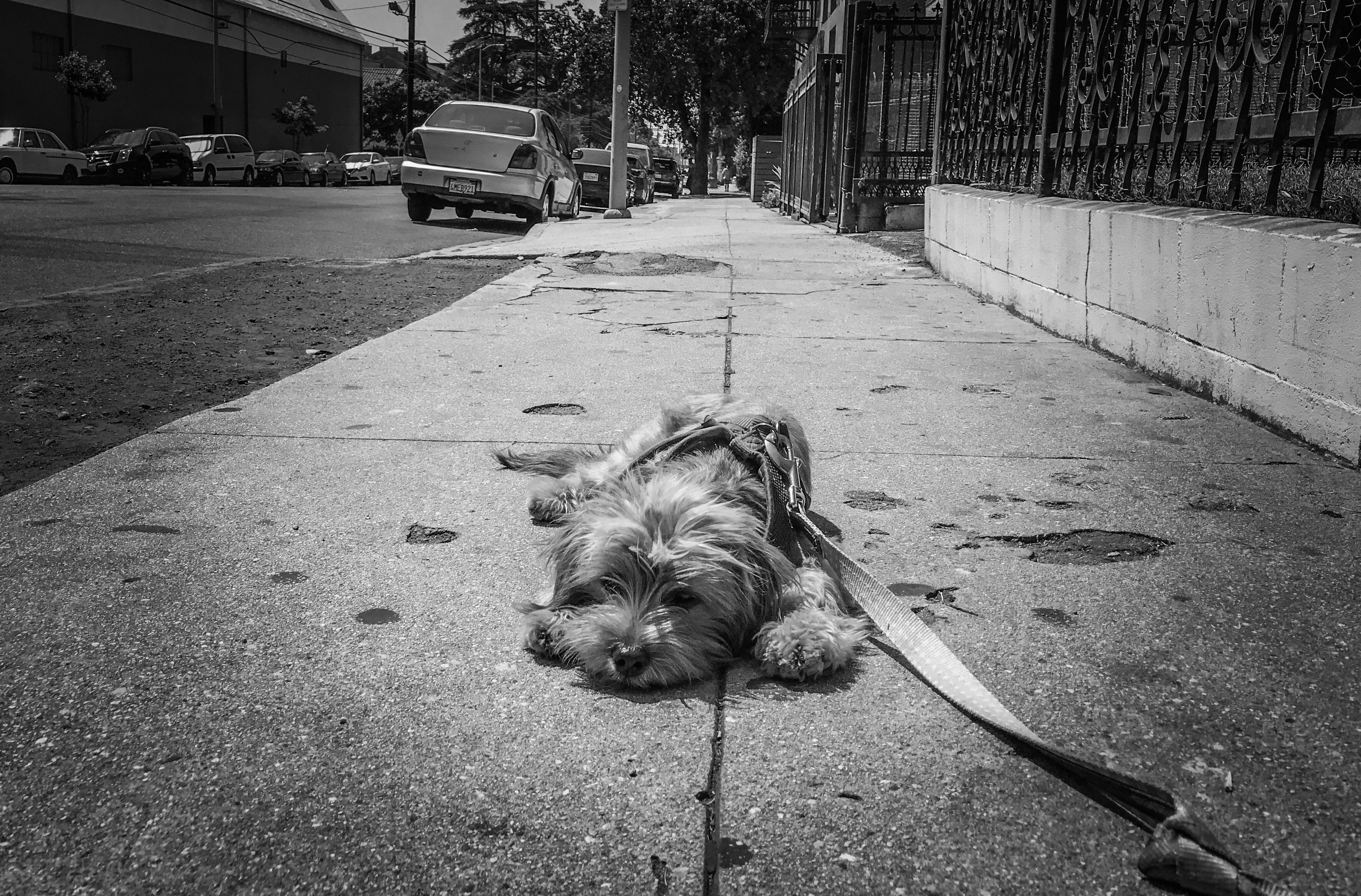 I know that Duke loves us to death and I know he recognizes us as the entities that take care of his well being. When we got him at four months (he’s going to be six years old this November!), he approached us in the same stoic, unaffectionate way that Daisy did. Maybe even more so. He was born in a shelter and spent his life never being able to put confidence that at least one single person would be his forever family. It seemed easier.

I know that Daisy would warm up to us in the same way Duke did, but it was disheartening for me to try and bond with Daisy as a dad. How long would it take? How hard will it be for her to listen and learn to someone she doesn’t love and/or see as an authoritative figure? I dreaded all of that, especially how all that work might be undone with the multiple visits her dad wanted to have before he heads up north for the next adventure.

Life with Daisy After Ten Days

Potty training sucks and we’re on a consistent schedule of being around to do potty breaks every 5-6 hours. This will remain as a ‘round the clock task for the next few months.

Daisy and Duke get along so well! she’s taken to her bed and crate and spends her days bringing random objects to the bed to chew on. In addition to a new buddy to play with, Duke has become a bit gentler with roughhousing when it comes to smaller dogs.

Lately, Daisy has been following me to the bathroom, whining to be let in. She follows me anytime I get up to go anywhere, and cries when I leave. Tiff told me that Cody was on uncle duty last night as he tried holding her and keeping her distracted from the fact that I was gone, all to get some peace and quiet.

Daisy knew her name within the first day. She’s such a smart pup. I just hope that the mischief goes away.

A few days after Daisy has joined our family, we met up with Tommy to get him a shower, contribute to help him make it up north, and to see Daisy again. I got very jealous to see her act and do things with him that she didn’t do with me, but it was pretty satisfying when she treated me the same way very recently. She cried for her sister and dad, and wanted them all over again that night. 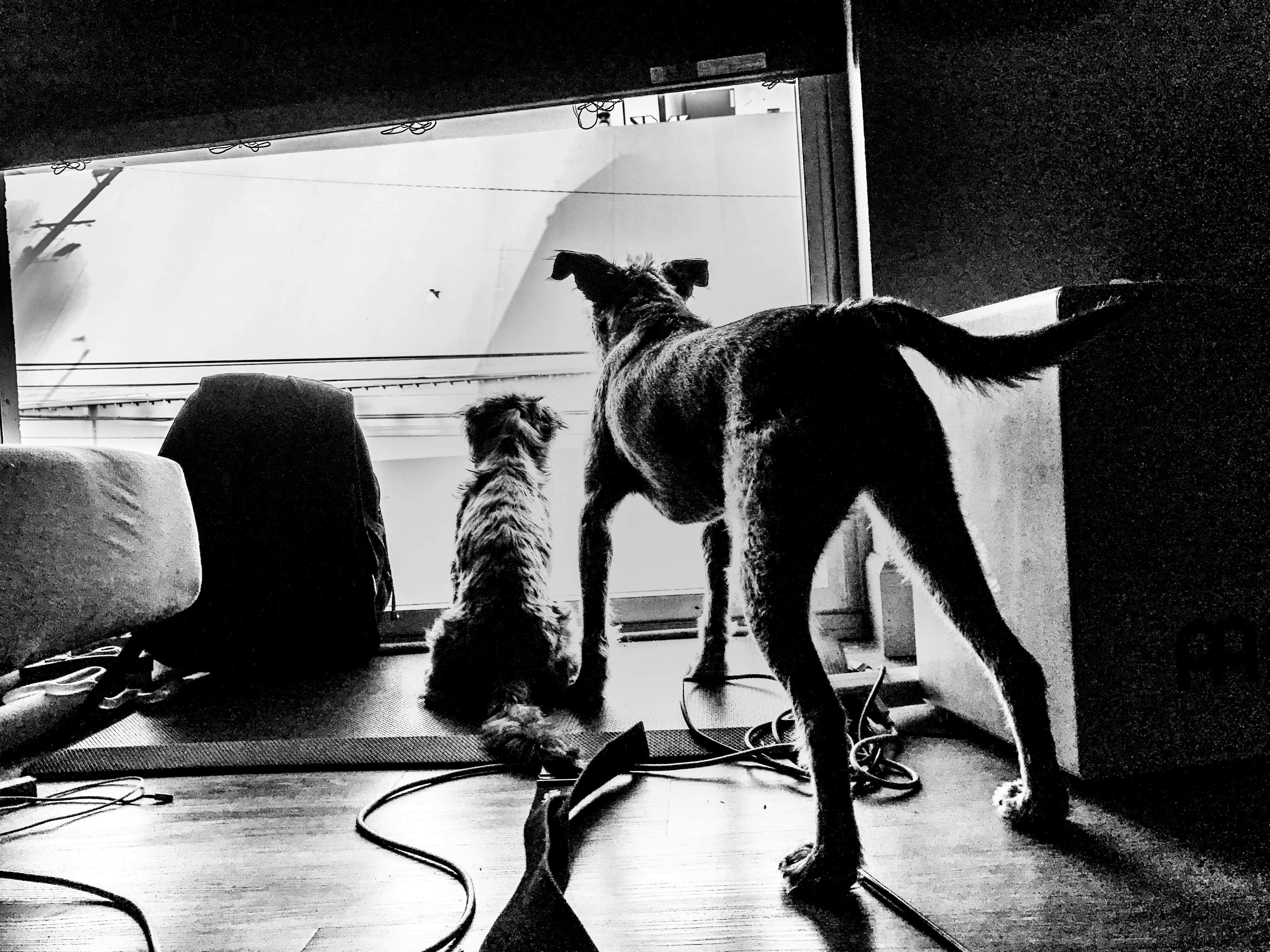 For Tiff and myself, having another dog, putting more responsibilities on our ever decreasing schedules, and making a commitment towards working together to make this work has brought us even closer together.

I’m excited to have another fur child join us on the many adventures we go on as a family. That dynamic of Duke having a companion as he experiences life in ways that other dogs, even many other humans don’t, makes the experience different for everyone. 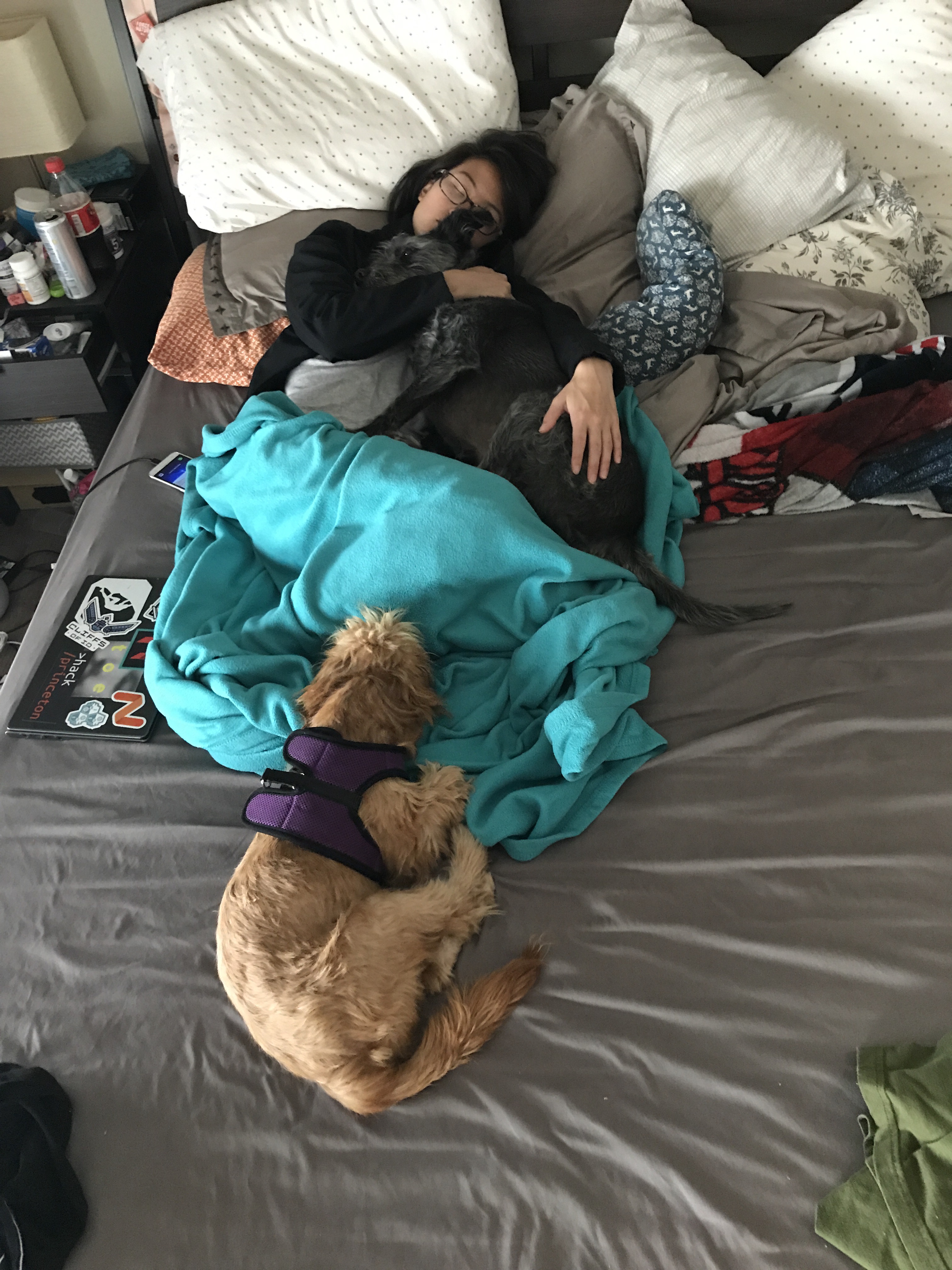 As I continue to increase my skills in software development, photography, videography, writing, and digital marketing, I thought it’d be a great time to try and start something for both Duke and Daisy. Duke already has an Instagram, we’ll see what to do with that, but I thought it’d be cool to create something quick for them. Check out www.daisyandduke.online.

Help Me Scratch My Itch

I’d like to take this opportunity to let you, the reader, know that no matter who you are, I would really like to take a real chance at helping you out. In anything, really. Whether it’s breaking into the Computer Science field, some software development site, writing a cover letter, reviewing a resume, creating a professional website, anything.

I’d like to try at least. Just know that there’s always someone on your team rooting for you.