I started a new job about a month ago with McGraw Hill Education. Yes, the same company that published all of our elementary and middle school textbooks.

In two years since finishing college, I’ve joined a team as a member who should have many years more experience than I actually do. Luckily, this team, referred to by others in the company as “rockstars”, realizes that time based experience is BS and took the necessary steps to make sure that I could play the part. The interview process took about a month. Thank you thank you tiresome, seemingly endless nights of learning and blogging (living in Hollywood hasn’t been all fun and games).

So, I’m the least experienced engineer, and I hope that 1: I’ll be able to use this to my advantage and grow so much faster, and 2: that there are people on the team who can put up with me and possibly be mentors.

Quick update aside, what I’m getting at is that my job responsibilities are pretty demanding, and that the people I’m working with are at the top of their game within the Computer Science/Software Engineering field. I’m climbing!

Last week, I had a task that required me to work with people from different teams. This task involved validation of a grading scale, you know, a class grade of 91-100 = A, 85-90 = B, etc. (how insane is it that someone who has had shitty grades for their entire academic career is literally writing grading management software? ##the#irony #hashtagception). Attendance for this meeting was required by myself and one other person, but was open to about forty other people.

Luckily, a third person joined. This person actually wrote code related to what I was trying to solve. In this meeting of just three people that I’ve never worked with before, the only takeaway from the engineer who joined the optional meeting (I’m going to call him K), in addition to solving the problem, was that he sounded asian (you know how you can just tell?).

A few minutes after our meeting, I thought I’d send him a message and say hi since I don’t really know anyone yet. I was tied up and decided against it, but from his profile picture in our company internal chat application, he looked to be asian for sure, maybe even half black or something (southeast asians are dark. #foreshadowing).

A few minutes later, I get a message from him: 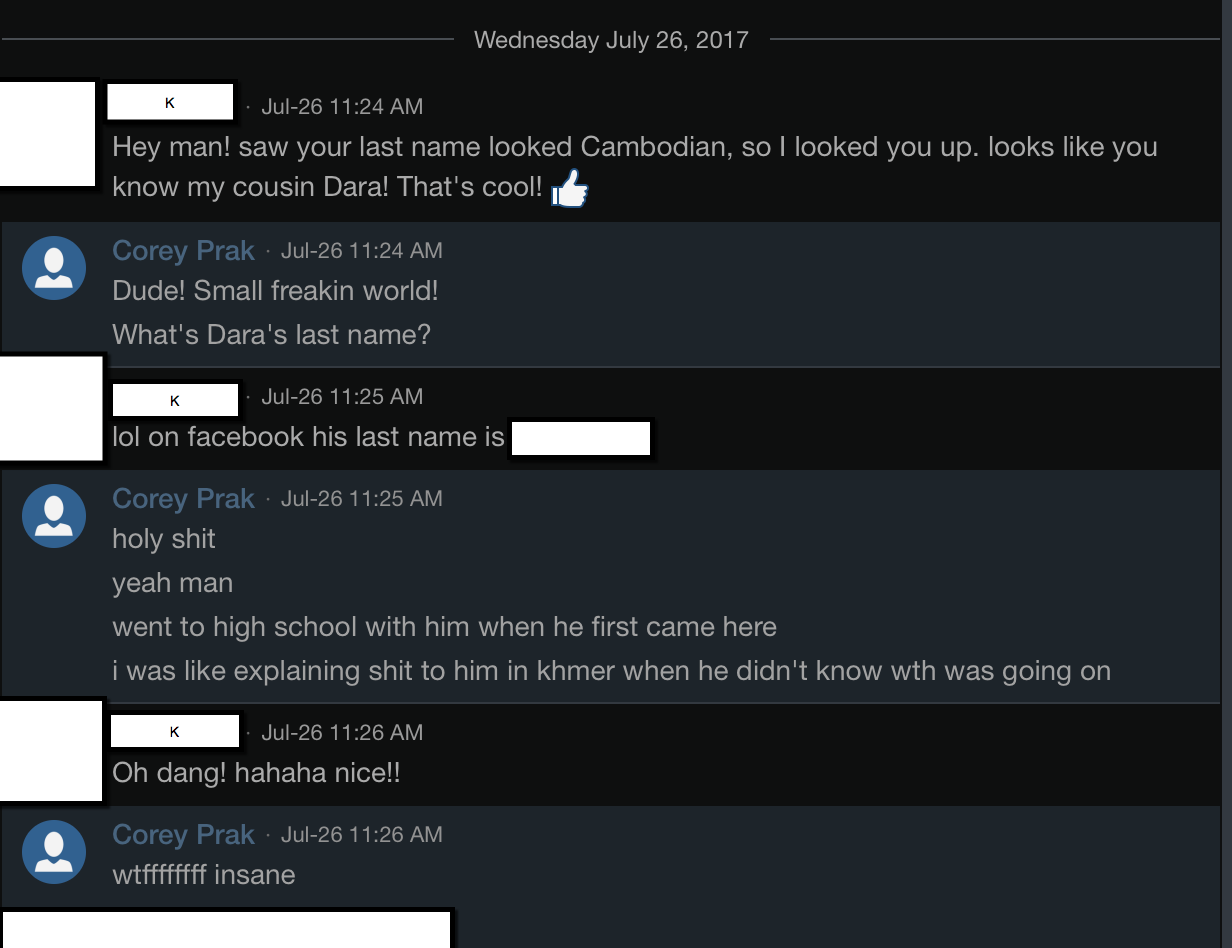 I honestly thought he was joking. While the company has a worldwide presence and offices in big cities such as Boston, I thought he was mistaken. At this point, I only moved to California for a year and three months, and I’ve only really met one Cambo here (an introduction from another Cambo who visited from back home).

We did a bit more digging, and it turns out I went to High School with his cousin on his mom’s side who is mostly from Conneticut (Fun fact: Lowell, MA has the second biggest Cambodian community in the US, the largest being in Long Beach, CA). Really.

When K’s cousin first came to America, our High School system didn’t really know what to do with him when it came to certain english only classes like Gym, so I was the person who helped him out and translated things for him.

We never really met outside of that class or became good friends. I actually ran into him at a wedding or two within the city years later, where he expressed to my mother and fiancé how big of a help I was. I ran into him again, years later at a popular casino that Southeast Asians frequent. Turns out he moved there. He’s doing pretty well; I can tell. The guy is a Facebook friend.

The Even More Amazing

We are just about an hour away from each other and have relationships/significant others who have a Vietnamese and Chinese background… They also have careers in the medical field. This was the most “oh shit I need to buy a scratch ticket or pick powerball numbers RIGHT FUCKEN NOWWWW” moment ever. 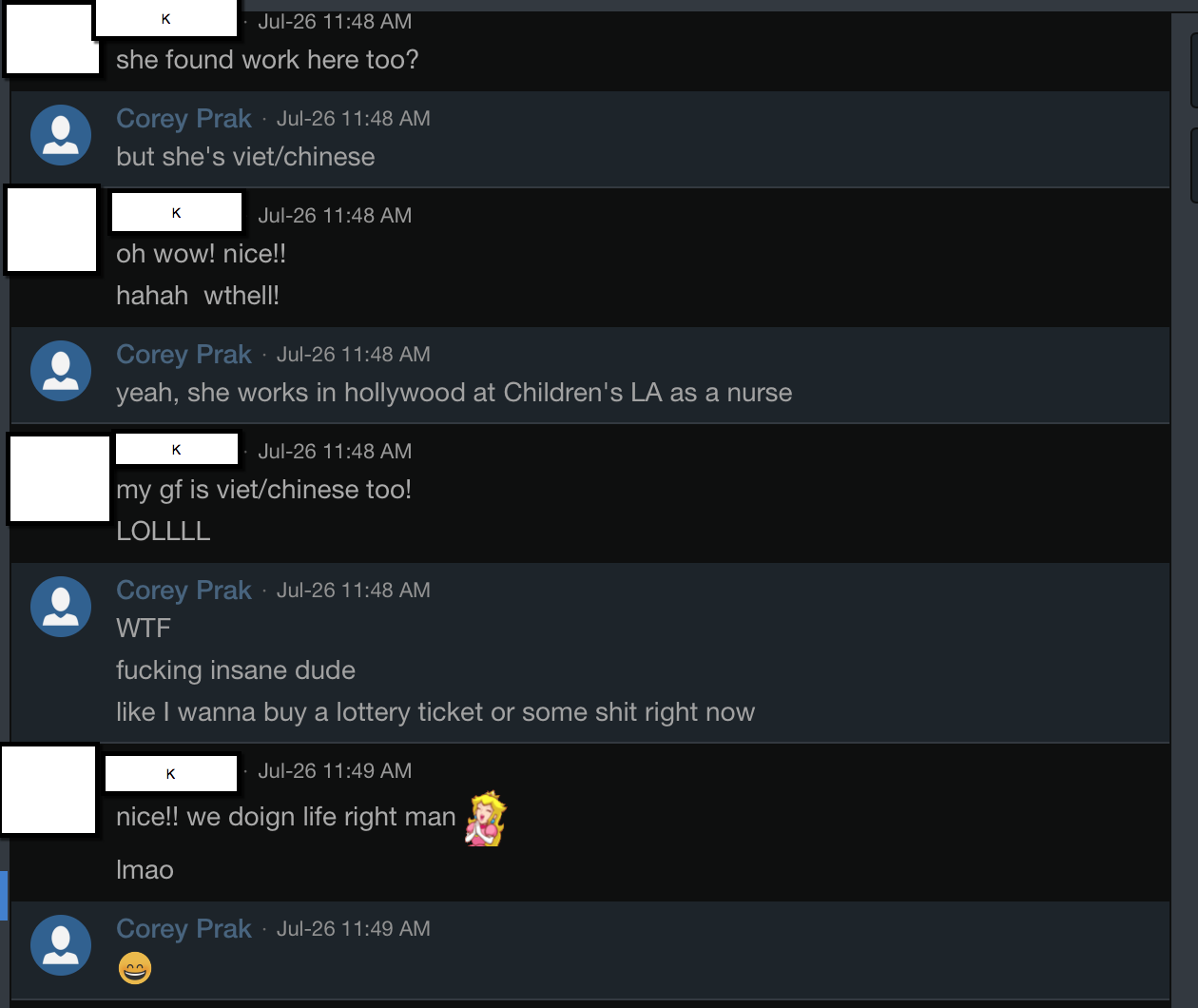 Connection revelation established, we both specifically pointed out how awesome it was to run into another Cambodian person in the field of Computer Science. K had visited Lowell for the first time this past August.

We gushed and raved to each other about how cool and awesome it was to be able to meet and work with another person of Cambodian descent. The fact that this occurrence is recognized is fine, but the rarity of it is something that I need to address.

K’s last name has Khmer roots that are obvious. Not even for a second did I recognize it. I closed my mind to this subconsciously, wth?

My parents on both sides fled their own country from genocide, and I think part of why they never pushed me to go farther than obtaining a college degree or achieving something monumental is largely influenced by that. Living is enough.

I think that the “world view” or “horizons” of many Cambodian parents and grandparents today aren’t as wide or largely influenced by many things. If you’re rolling like us and you had a mortgage, you made it. Imagine my absolute surprise when I spoke to people in school and learned that they had a vacation home. “BRUH WTF, YOU HAVE A HOUSE THAT YOU ONLY LIVE IN SOMETIMES?!?”

I would go so far to say that literally every single person of Cambodian descent right now in the US is a refugee or either has at least one parent who is one.

To make it clearer, anyone from Gen X (born late 1970s to early 1980s) and before is directly affected by Pol Pot’s regime. We could say this is true for literally everyone, but my cutoff is that my kids wouldn’t count since I was born here.

I think this feeling of, “oh damn, someone like me, here?!?” is shared by other groups of people. African Americans to at least some degree. Even women. However, there are accomplished and established people today of the groups I had just mentioned with history spanning decades across the entire world, be it sports, music, business, etc.

There’s only a few Cambodians I can name who have achieved notable recognition. From the top of my head is the Canadian rapper/artist Honey Cocaine. Really cool, but kinda ehh. No disrespect, you now what I mean.

For my khmer people who are informed, you all probably know about about Hella Chluy, the absolutely ridiculous, wannabe clown rapper singer something I-don’t-know-wtf to call him. And then there’s C.Crave, Black Ambassador to Khmer Culture who has done more to appreciate and promote our culture than many Cambodian Millenials ever will in their lifetime. Yoooo, remember how we tried to take credit for that half french, half Cambodian actress right?!? That Bond chick, Bérénice Marlohe.

To reiterate, we have a rapper/artist, clown, another rapper/personality who is 0% Cambodian, and an actress. Again, no disrespect, you now what I mean. But what the hell, this is all we got going to bat for us? Please agree with me when I say that there should be more.

Bruh, show me an Cambodian American who has a vacation home. I’d have a heart attack.

I acknowledge there are many Cambodians who are making it in their own way, in different fields and various industries. I’m totally not aware of these people and you need to let me know who they are. I’ve been to busy grinding and making it on my own to care, honestly.

There’s probably people who have made it who don’t care to advertise it or help and just want to live life. I get it.

Our history in the world has all kinds of accomplishments and blemishes. From a lush and prosperous past as one of the greatest kingdoms in the world to the horrible, horrible regime of Pol Pot, Cambodia as a country and people still have a lot to offer.

For Cambodian Americans and everyone else in the world whose came for a better life/future, we should at least recognize opportunities to grow, appreciate the consequences that allowed us to be here that our ancestors never had, and be humble. Pay it forward if you want, be selfish or whatever, but most importantly, be happy.

If you’re American, there’s a part of your history which involves emigration. The difference between the history of Cambodians now and everyone else’s is that ours is still so young. We’re just now making our mark, damnit.

Working to ensure that our impressions on this increasingly hot rock is positive and that our contributions are lasting ensures we are never forgotten and makes the world a better place.

Whether you want to rule the world, play video games all day, or F Bs in the whatevers and get money, we got this.

Let’s fucking get it.

Help Me Scratch My Itch

I’d like to take this opportunity to let you, the reader, know that no matter who you are, I would really like to take a real chance at helping you out. In anything, really. Whether it’s breaking into the Computer Science field, some software development site, writing a cover letter, reviewing a resume, creating a professional website, anything.

I’d like to try at least. Just know that there’s always someone on your team rooting for you.